What are the most common misconceptions about Esperanto?

Sometimes otherwise well educated people, can say the strangest things about Esperanto and its speakers. What are the most common misconceptions, prejudice and myths that we face? Are these misconceptions varying between different parts of the world?

Of course, this reasoning has errors at every level.

"Esperanto has no culture."

To this one, I say "yes and no". People often comment that one of their main reasons for learning a new language is to learn about a culture, to experience its literature, learn its history, etc. This isn't something I have any desire to argue with, as someone's reason for learning a language is entirely their business.

But is it true that Esperanto has no culture? My answer is, as I mentioned, yes and no. Clearly, Esperanto's history is different compared to many languages one might study. Our body of literature is relatively small, same goes for our music, poetry, films, etc. And all of our history begins in the 1800's, not very long ago. And there is no Esperanto country or capital city or even neighborhood, where one can go anytime for some immersion. Our population is scattered, and small compared to many of the world's more "popular" languages. Considering all of this, I can see how this would be described as Esperanto having no--or at least very little--culture, especially by someone for whom a wealth of art, tradition, history, and the ability for 24/7 immersion is the main attraction to language learning.

Before I go on to describe what I consider to be Esperanto's culture, I want to point out that the above is, well...Kind of the "point" of Esperanto, at least originally. Esperanto was supposed to be neutral. It was supposed to be nationless, historyless, cultureless--the intenton being to make it free of the historical baggage that other languages carry. Nobody's hometown has been bombed by an Esperanto speaking nation, nobody has been imprisoned and tortured by Esperantists, nobody has had their children taken away and placed in an Esperanto school. When you speak Esperanto, you are supposed to be speaking a language that has a "clean record" worldwide, a language you could call a blank slate. Infusing such a language with cultural norms and taboos would begin to undermine its concept. (Now, whether Esperanto has actually ever achieved these "goals" of neutrality or if they are important to most Esperanto speakers today, is a whole different discussion...)

So if my answer is "yes and no" then what do I mean? What is Esperanto's culture? Well, obviously, though small, we DO have a body of literature, we do have a music scene, we do have films, etc. And though short, we DO have a history. And we do, actually, have some physical locations throughout the world that could one day become hubs of Esperanto activity, Herzberg am Harz, the "Esperanto Town", being one example. I could go on at length trying to describe the quality of our literature and whatnot, but that's not really what I am getting at and I'm sure you can find the information already written up somewhere (perhaps you can start here). And we DO have taboos, we DO have social norms and biases, which are also elements of culture, for better or worse.

Here's what Esperanto culture is, in my view: it's the thoughts, actions, and beliefs of the currently living and breathing Esperanto speakers whenever they get together and create an instance of Esperantujo. Maybe that is insignificant to someone who wants to study history and books, but to me it's fascinating. Esperanto is a language who is "just starting out". We are just recently reaching the point of having enough speakers that the rules of the language are beginning to bend under our weight; the reigns have fallen out of our hands and we are along for the ride as the language evolves, and it's evolving due to all of our involvement with it. No single person can say "this is what we should do from now on"--like any culture, we now operate more like a flowing tide of ideas than one single person instigating and guiding all changes. We have a living language developing and growing before our very eyes, and this is the result of our collective contributions, intentional or not. It's a first row seat to the first stages of the blooming of a culture from a very small seed.

Esperanto is both a "brand new" and "artficial" language and yet it can easily express the natural thought patterns that occur in the human brain structure which evolved before recorded history. It's a window into human minds across the world, skipping over our differences and focusing specifically on one of the things that uniquely connects us all as human beings, one of humanity's oldest cultural assets--language itself. Something about that is fascinating and very moving to me. Maybe other people will not be "persuaded" by this, though my intention is not really to persuade people to learn Esperanto if they don't want to, rather I just want to describe what I think also counts as culture and might be worth some interest.

"Esperanto is a failure because I hadn't heard of it until you told me just now."

That you can't make jokes or curse in Esperanto.

That it is Spanish.

That a language has to be spoken somewhere to be successful.

That you need a country to go to to learn it.

That nothing happened since you heard about it thirty years ago.

That it isn't useful.

That there aren't "enough" speakers.

That learning it won't open up new opportunities and change your life.

That only crazy people learn it. 😄

These are clearly all wrong. 👍 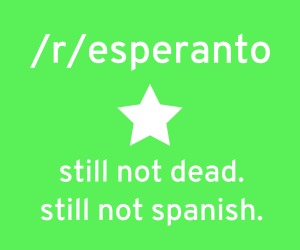 Probably no one knows which of the many misconceptions about Esperanto are the most common ones. I don't know any research about this.

We also have to define what "most common" means, e. g.:

Here is a list of all the misconceptions, I was able to find (in Esperanto), Esperanto-wikipedia: Eraroj kaj mitoj pri Esperanto with all the references I found. I would be glad, if you would add more examples in case you know some more sources or more misconceptions.

The misconception I had for quite a long time was: "People who learn Esperanto nowadays do it because they want it to be the international auxiliary language". This misconception is kinda understandable, because that was the main goal of many Esperanto speakers for a long time.

It's hard to find good statistics, but it is clear that nowadays many Esperantists aren't concerned whether Esperanto can become an IAL, and it's very likely that the motivation of a great majority of Esperantists is based on completely different reasons, such as the possibility of meeting like-minded people.

Not the answer you're looking for? Browse other questions tagged history or ask your own question.

17
Why do so many prejudices and misinformation exist about Esperanto?
15
Is Esperanto a viable language to put in the "languages spoken" section of my resume?
4
How many books are there in Esperanto?

11
What is the link between billionaire investor George Soros and Esperanto?
12
Are there good reasons for the prefixes and suffixes in the table of correlatives?
26
Why are country names in Esperanto so "irregular"?
6
What is the origin of the Esperanto green star ("Verda Stelo")?
17
Why do so many prejudices and misinformation exist about Esperanto?
10
What was the first Esperanto telegram ever sent?
12
How has Linux geek culture reacted to Esperanto over the years?
2
What are the big events that help spread the Esperanto Language
4
How often are new loans fully integrated into Esperanto?
4
What are origins of basic suffixes?