How to say "stirring spoon" in Esperanto?

I have tried ReVo, ESPDIC and Google Translate with no success. Maybe I am calling it wrong in English. It's an ilo that's suppossed to look like this: 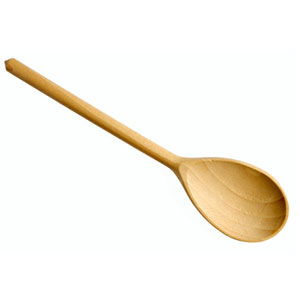 I noted besides "stirring" it's also called a "wooden" or a "cooking spoon", all of which obviously can be given (mutually different) direct translations. But I'm not interested in, for example, a

that's just made of wood, if there's any more direct term. With what I mean I wouldn't eat a soup, rather make one: it's too shallow and large and has splinters!

It seems that German and French have some analogues of "cooking" and "wooden" spoon, respectively. Russian, to my best knowledge, has a separate word for this, based on stirring, and Polish "warzecha" is similarly a single word, based on cooking (no idea on how to parse "kopyść"). So there's no agreement between these languages either, at least not enough to pick one of the above options.

My first impulse would be to call it a ligna kulero or lignokulero, but since there are places where people use wood (e.g. bamboo) for table cutlery, perhaps you might prefer ligna kuirkulero, kirlkulero, mikskulero (respectively: cooking, stirring, mixing spoon).

I don't see what the problem is, here we call them wooden spoons, why you can't do the same in Esperanto, we never eat with wooden spoons only metal and sometimes plastic.