What is the origin of the Esperanto green star ("Verda Stelo")?

What is the origin of the Esperanto green star symbol (Verda Stelo)? 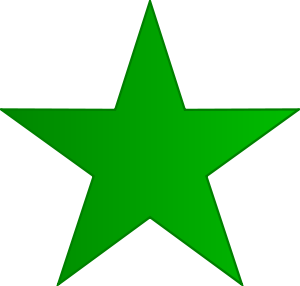 The Verda Stelo was created by Zamenhof in 1892 as a symbol for Esperantists.

When asked about this, he said,

"It seems to me, that my attention was drawn to the color green by Mr. [R. H.] Geoghegan and from that time I began to publish all of my works with green covers . . . Looking at one of my pamphlets that I had entirely by chance printed with a green cover, he pointed out that this was the color of his homeland, Ireland; at that time it came to me, that we could certainly look at that color as a symbol of HOPE. About the five-pointed star, it seems to me, that at first Mr. de Beaufront had it imprinted on his grammar [of Esperanto]. I liked that and I adopted it as a symbol. Afterward by association of ideas, the star appeared with a green color."

Note that this quote wasn't sourced, but I've seen this explanation often enough that it seems to be quite likely.

This is a quote from a reputable source.

6.7. Does Esperanto have a logo or symbol?

Yes, there are several. The green star is the oldest and most widely used: it appears on the Esperanto flag, among other places. The colour green stands for hope, and the five-pointed star represents the five continents.

Not the answer you're looking for? Browse other questions tagged culture history or ask your own question.

12
How did the color green become associated with Esperanto?
6
What is the relationship between Esperanto and spiritism?
26
Why are country names in Esperanto so "irregular"?
13
Is there an official Hex Color Code for the Esperanto green and what is it?
15
Why are many companies using Esperanto words for their brand name?
16
What are the most common misconceptions about Esperanto?
7
What is the origin of Pasporta Servo?
10
What was the first Esperanto telegram ever sent?
12
How has Linux geek culture reacted to Esperanto over the years?
2
What are the big events that help spread the Esperanto Language