How does one say "It's all Greek to me" in Esperanto?

The idiom "It's all Greek to me" means that something is not understandable. Different languages have different variants of this. How would I express this in Esperanto?

From here (but I’ve also heard it explained from people somewhere, maybe Evildea, if I’m not mistaken):

Which comes from the other constructed language Volapuk which is regarded as “too hard” and therefore this meaning in Esperanto.

Is a great way of expressing this. "It's all Greek to me." means that something is not understandable. https://en.wikipedia.org/wiki/Greek_to_me

Historically, Esperanto and Volapük have an intertwined history, Volapük was the first international language with a somewhat big following.

Volapük has logical grammar but the words are changed from their English and German roots in a haphazard way that actually make them not understandable. World -> "vol", "speak" -> "pük", "Diplom" -> "plom", "Problem" -> "blem", "Kompliment" -> "plim". (as written in Die Zamenhofstraße by Roman Dobrzynski, p. 178)

What does "löfob oli, o lanan obik mean? The language isn't meant to be readily deciphered by someone unfamiliar with it. In contrast to Esperanto: "mi amas vin, mia anĝelo" is easy to understand because of the cognates in the words. Volapük is based on (roughly) the same languages that Esperanto is based on.

It could be easy and understandable but it isn't! Volapük is all Greek to me. 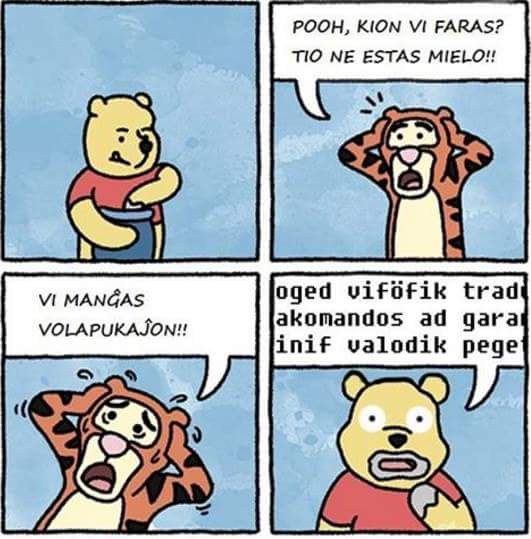 Not the answer you're looking for? Browse other questions tagged word-usage translation or ask your own question.