There seems to be several words in Esperanto that all correspond to the English verb "to share". Right now I can think of dividi, diskonigi and kunhavi. I'd love to see a collection of them all, and in which situations to use which ones. 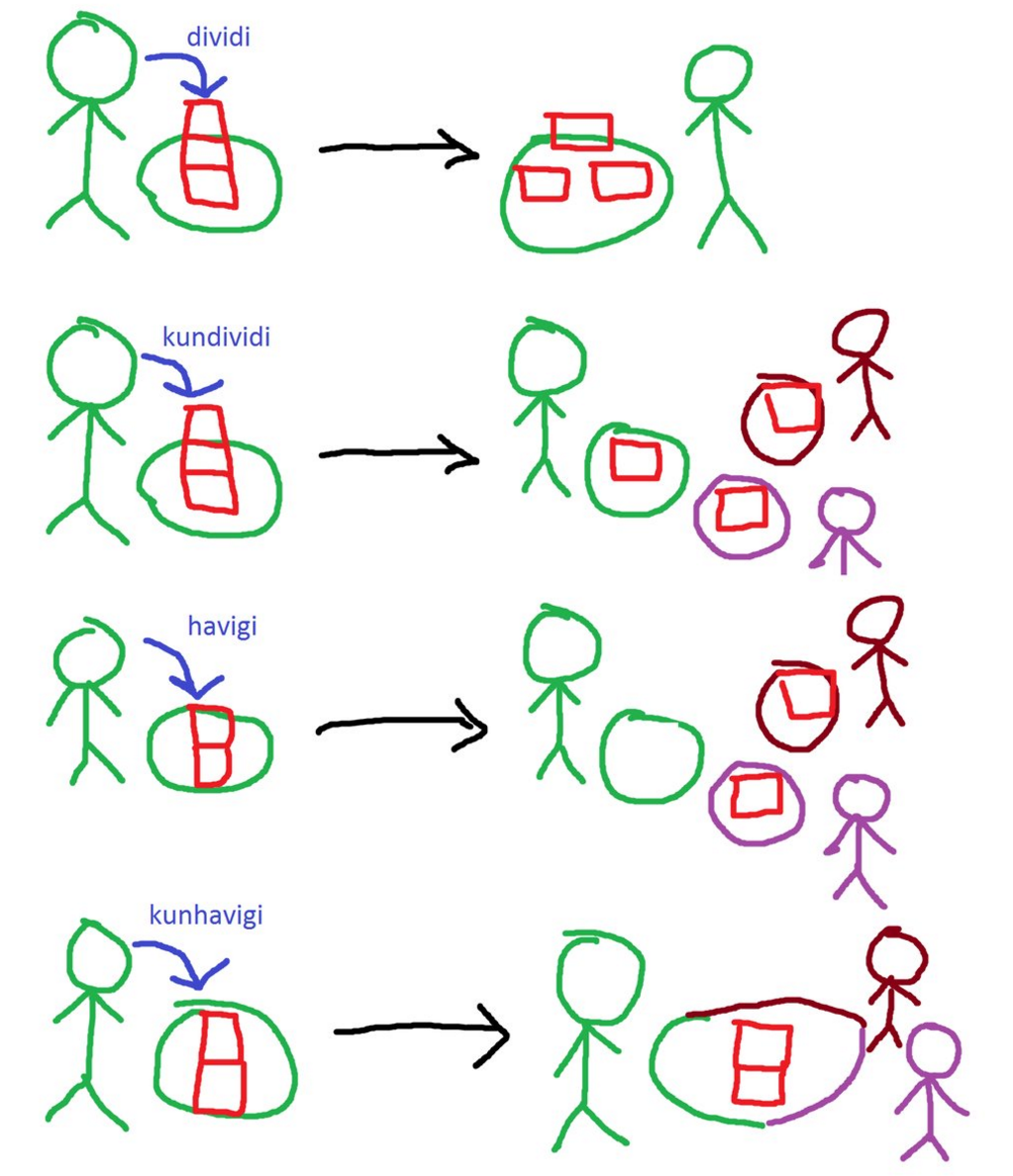 This question was discussed in the Facebook group Duolingo Esperanto Learners.

There was some disagreement among the fluent speakers about how far the word dividi could be pushed without being considered an anglicism.

There are certainly many examples of dividi being used with thoughts, experience, expertise, and objects that are not chopped up and parted out. Based on examples found in the Tekstaro, dividi can be used with fate, thoughts, remarks, danger, happiness, and opinions

As for "sharing" things on Facebook, the term diskonigi is in use - possibly due to Richard Delemore's use of the term in his Evildea videos. Note that different social media use different expressions for this action. Certainly dividi and reafiŝi could also work.

The anglicism "divide" for "sharing" is already present in many languages in which "share" and "divide" have the same meaning.

Is kunhavig' actually a good word for sharing in social? "Hav'" suggests ownership but by "sharing" things on the internet the ownership does not change.

Kunkonig' looks better and more exact solution (make-known-together). Google Translate has it and translates exactly to what it means.

Common for those forms of sharing that Vanege illustrated is that something is concretely or figuratively divided or split into parts.

In contrast if you share information, it is not split but rather the same information becomes available to others. For this kind of sharing there is a lot of variation. Some use havigi, but like the verb prunti, is not clear whether havigi results in that you have something ("make someone to act that you have") or the others ("make others to have"). Others use komunigi, but PIV has an example komunigi la kampojn de vilaĝo which leads one to think about somekind of co-owning.

Not the answer you're looking for? Browse other questions tagged verbs meaning-in-context or ask your own question.

11
Does Esperanto have gerunds?
8
Does “priskribi” only relate to a written description?
3
How can I say "exercise"?
7
Does Esperanto offer as many synonyms as English?
4
What is the assumed subject of -u form verbs
3
How can I express "to be supposed to"?
13
Does Esperanto have any rules about the transitivity of verbs?
2
How to translate "custom" in "custom file formats", referring to various rich-text formats?
0
How to express "efficiently" in "express <a meaning> efficiently" in Esperanto?
0
How to express "to share a hotel room" in Esperanto?